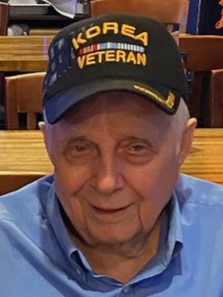 Louis Chalfant, 91, of Crescent Springs, passed away on Friday, January 6, 2022, at his residence.  He was a retired Supervisor with the Federal Reserve in Cincinnati, Ohio.

Louis was a lifelong member of St. Ann’s Church, where he was an Altar Server until age of 85. He was a member of Kelly Furnish VFW, the Ludlow Vets and was a Kentucky Colonel. He proudly served his country in the United State Army during the Korean War and was honored to travel on the Honor Flight to Washington DC. Louis lived life to the fullest. He loved having Easter egg hunts, all the food at Thanksgiving, decorating for Christmas and having a nice cold beer. He loved watching college sports, but most of all Louis loved being with his family. Louis was the most loving father, grandfather, brother, and friend.