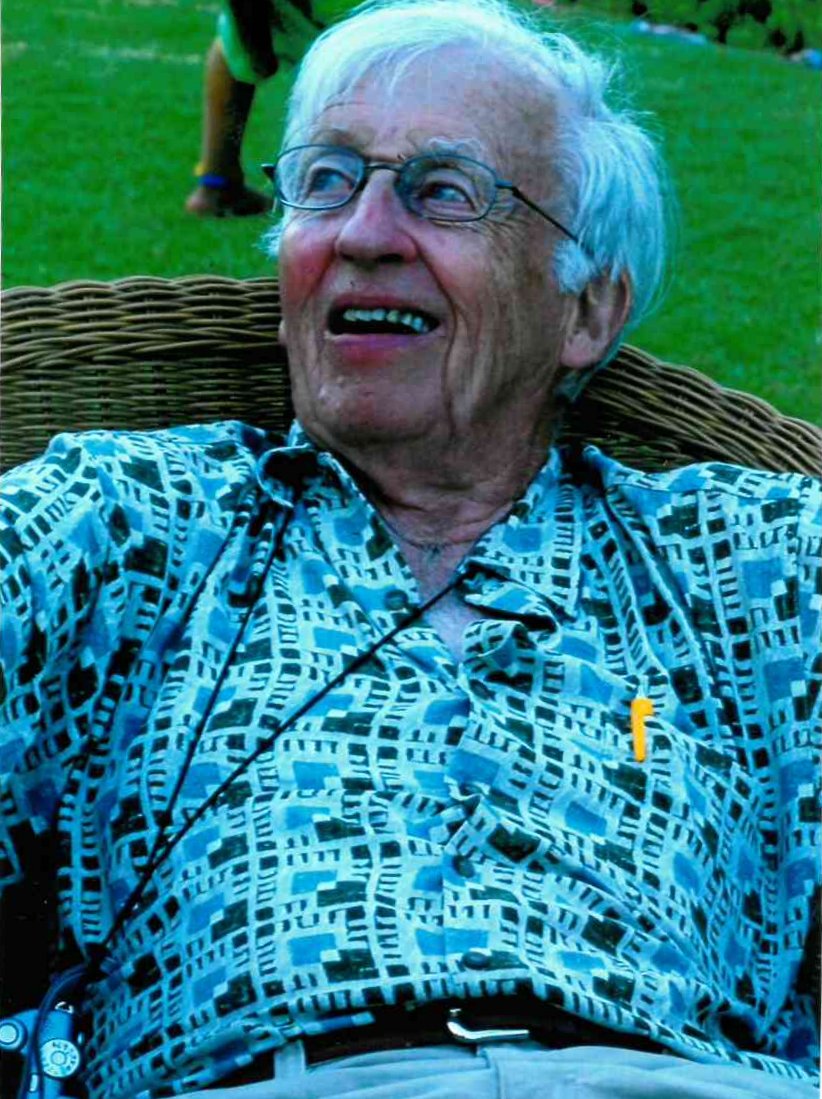 Our father, Paul Thistleton, 95, passed away peacefully on Sunday, 7 June 2020, surrounded by many of his family members, including our mother, his wife of 68 years. Dad was born in Bournemouth, England.  His father, Fred, described him as having a “natural appetite for learning”, which was clearly evidenced as he graduated from a Bournemouth high school at age 15 and then London’s Imperial College with a degree in physics at age 19.  At 26, he earned his masters from MIT in Boston, where he met Mom who was the Private Ward Dietitian at Harvard’s Peter Bent Brigham Hospital.  Dad quickly knew that she was the one, because he proposed after only four dates.  She must have known, just as quickly, because she saved (to this day) the lamb curry recipe from Family Circle magazine that she cooked the night they met.

After their wedding, they moved to England, for a year, before moving to Texas and ultimately making Parkersburg, WV their home with Dad’s long career as a Chemical Engineer with DuPont.  Together they raised four children in Parkersburg.  Dad’s appetite for learning definitely included travelling, taking the family to state parks for long weekends with Mom’s family or to England for visits with his father and step-mother.  Much of his work at DuPont was with a Japanese joint venture, offering many years of hosting Japanese colleagues in Parkersburg as well as travel to Japan.  Dad recently recounted, “one big regret is that I didn’t make a serious effort to learn Japanese.”  But that didn’t keep him from making lifelong friendships with many of his Japanese colleagues and their families.

Dad’s appetite for learning as well as his desire to leave the world a better place was likely a catalyst for his many years on the Board of Education in Wood County, WV, including as its Chairman.  He balanced his love of learning and obvious intelligence with his dry, English wit—and there was never a pun he missed even in his last days, commenting about the problems with his colon, noting that clearly it wasn’t an issue with a semi-colon.  Dad led a full, healthy and happy life.  He wrote recently that he considered “happiness to be a byproduct, not a goal”; believing that happiness stems from one’s temperament, values, experience—one’s character, and prompted by time with family and friends and particularly, his wife, children and grandchildren.

Dad loved music and fortunately so did Mom as their second date was to the opera. Not surprisingly, classical music was a backdrop to our lives. Dad wished he had learned to play an instrument.  But he was comforted by the fact that most of his children and grandchildren learned to play at least one instrument.  Sadly, his poor hearing kept him from enjoying music later in life.

Anyone who knew Dad knew he loved taking pictures.  First, it was always a camera around his neck and later a phone in his pocket. Growing up (and even lately), we were often caught rolling our eyes, when the camera came out.  However, those pictures provide a wonderful record of our happy family times. And on his last lucid day, he was quite concerned that his phone was properly charged, so he could take pictures of the family surrounding his bedside, which he did—and which we all cherish.

Beyond the years in Parkersburg raising their children, Dad and Mom’s favorite days were in retirement in Trinidad, California. They built a home with magnificent views of the Pacific, waking to the sounds of the crashing waves and loudly yawning sea lions.  They made many close friends and volunteered for a variety of local causes. They only moved back to Kentucky when the grandchildren specifically asked them to come closer.  It didn’t take them long to sell their house and pack the moving van, knowing that their final phase of life would be best if surrounded by those they love dearly.  And Dad, as you wrote about your father, “he was a good man, and I loved him deeply”.  Dad, you were a very good man and we love you deeply.