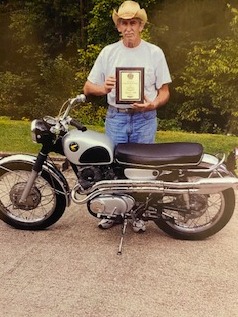 Frank “Dusty” Palmer, 71, went home to be with the Lord on Friday, April 17, 2020 at his residence. Dusty served our country in the US Navy during the Vietnam War on the U.S.S. Jason. He was a retired Shop Manager with United Maier Sign Company. He loved to work on and build cars and motorcycles, so he ran a business with his brother in their garage for many years which evolved into Midwest Kustom where he worked on and built motorcycles and signs. Dusty also loved going to and participating in car shows for which he won many awards including best in show.  He was a member of Immanuel United Church of Christ in Bromley, the Oldsmobile club of America, National Antique Oldsmobile club, The Valve Jumpers and the Confederates Hotrod Club. He liked taking drives with his wife; buying stuff he didn’t need; walking his dog and feeding treats to the neighborhood dogs. Dusty was also a big surfing enthusiast.  He really loved the old Woody’s with the surfboards on top.  He owned a lot of surfboards! He also enjoyed his painting and artwork especially painting and pinstriping cars – he put flames on everything! But most important to him was spending time with his family and playing with his grandson.  He was 100% selfless and helped anyone in need. He was a people person who never met a stranger.

Dusty is preceded in death by his parents, Georgetta and Franklin Palmer, and his sister, Patricia Palmer.

Due to COVID-19 restrictions, services are private and at the convenience of the family.

In lieu of flowers, memorials are suggested to any local pet shelter of your choice.

Inurnment in Williamstown Veterans Cemetery North will take place at a later date.