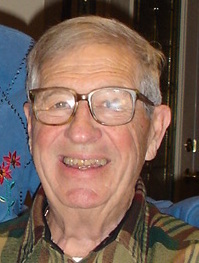 John C “Jack” O’Donoghue passed away on Saturday, April 16, 2022, in Edgewood, at the age of 92.  Jack was born March 2, 1930 in Ludlow, KY to Marion and Cecilia (Burke) O’Donoghue.  He spent his childhood in Frankfort, KY and survived polio at the age of 8.  Jack graduated from Good Shephard High School in 1948.  He worked his way through high school at Rebecca Ruth Candy and by delivering the Louisville Courier Journal newspaper.  Jack then joined and proudly served in the United States Navy on the destroyers: USS Stribling, USS Jarvis and USS Biokro.  He worked for Meijers Wine Distributers in Cincinnati, OH for 32 years.  Jack was a member of the Naval Reserve, Ludlow Knights of Columbus, VFW, Ludlow Vets, Tin Can Sailors and Ludlow Hobo Club.

He was preceded in death by his wife, Mary Grace (Maley) O’Donoghue; his parents, Marion and Cecilia O’Donoghue and his sister, Marilyn O’Donoghue.

He is survived by his nephews, Tom (Mary) Maley, Mike (Pam) Maley; niece, Judy (Mike) Grout, also his caregivers and 7 other nieces and nephews.

A Mass of Christian Burial will be celebrated on Friday, April 22, 2022, at 10:00 AM in Immaculate Conception Church, 2310 Robertson Avenue, Cincinnati, OH.