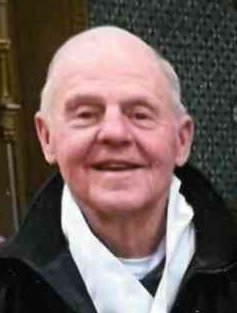 Jim was a lifelong resident of Northern Kentucky, growing up in Park Hills attending St Agnes Grade School and St Henry High School. After graduation he volunteered for the Army, he was assigned to Ft Hamilton in New York and became a member of the Rifle Team as a sharpshooter competing against other service members.  Jim would say, “when they found out I was from Kentucky they asked if I knew how to shoot a rifle, I said yes, and the rest was history”.  It was during his time in New York he would meet his future wife, Ida.

In 1962 Jim and his brother Bill founded Finke Bros. Market in Ft Wright.  The business is still flourishing today, owned, and operated by Bill’s three sons.  After leaving the market he became a Federal Meat Inspector, retiring at age 71.

Jim was a lifelong golfer spending much of his youth carry his bag up and down the hills of Devou Golf Course.  He would spend countless hours working with his grandsons teaching them the game he loved so much. He was happy to give pointers or a quick lesson to anyone who asked. Up until his 83rd birthday he was still playing three times a week and as many as ninety holes over a weekend on an annual golf trip with family and friends.

His constant smile, familiar laugh, and unique hat collection will truly be missed.